"My son Theo was diagnosed with acute lymphoblastic leukaemia (ALL) in May 2015 when he was 5 years old. A few people had mentioned there was a local charity, LEAF to me so I got in contact. Tash came round to the house and was an instant hit with Theo who came and squeezed in between us both to show her some games on his iPad. She was very easy to talk to and was keen to know what she could do to help. One of the things I had been struggling with was keeping on top of housework with frequent hospital trips, as well as juggling my part time job. Leaf arranged for a regular cleaner to come round and after spending a long day in hospital it is such a relief to walk into a gleaming house and not have to do any cleaning. Tash has kept in touch via text 'checking-in' regularly to see how I am, it is always good to hear from her. Leaf have also funded a day out at Adventure wonderland so that the family could do something all together as both my children love it there. We particularly wanted to do something that appealed to our daughter as she had had a hard time coping with her brothers diagnosis. All in all Leaf has made our lives a lot easier."
Pat Sansom, Michaels mother"At the beginning of June 2008, my son Michael was diagnosed with Acute Lymphoblastic Leukaemia, this was a month before his 19th birthday. It came as a shock for everyone as Michael hadn’t been ill.He had to spend about eleven weeks in an isolation ward as his immunity was so low. It was during this time that the ward clerk, Jenny, mentioned a charity called ‘Leaf’ and suggested I email them. This I did and was very quickly contacted by Tash and Sara offering us a family break for when Michael was discharged from hospital. We all went to Center Parcs, Longleat and had the most wonderful time relaxing and enjoying each other’s company away from a hospital bed.Michael continued his treatment as an outpatient and was determined to regain the physical fitness he’d had prior to his admission. To this end ‘Leaf” took out a membership to the health club Esporta on Michael’s behalf and he became a very regular visitor there. Michael is still in treatment and will be until August 2012. Obviously we are all counting the days, however, the support and great friendship shown to our family by ‘Leaf’ has made what could have been a truly terrible ordeal much more bearable. Thank you for all you do – long may you continue to bring a bit of sunshine into what could otherwise be a very bleak time for many."
Hi Natasha,I am so glad I've finally found a contact email for you. I don't know if you will remember but I spoke to you in November 2013 about my husband Daniel he had just been diagnosed with leukaemia and you kindly funded for him to have his sperm frozen I'd like to thank you so much for doing that for us when theNHS wouldn't. I wanted to contact you sooner but lost your details and Dan became very poorly he had a Bone marrow transplant in April last year and has had many complications since and became so ill to the point we nearly lost him he lost 9 stone and went down to under 6 stone March this year due to gvhd of the gut. He's currently on steroids and immune suppressants and doing A lot better and has gone up to 10 stone so I'd like to now say thank you for your help we have thought about you a lot recently as Daniel is attending Salisbury hospital next month to have his sperm count tested. I haven't fallen pregnant as of yet and Dr's say after transplant you are normally 100% infertile completely but we still want to see. I hope you are well too and sending many thanks from Daniel and myself. Lisa xx

My name is Luke Kelly and back in 2014 I was diagnosed with AML (Acute Myloid Leukaemia).Whilst receiving treatment for this at Poole Hospital I was informed about the LEAF charity, I was not only told the amazing story that Tash went through and how after her ordeal with Leukaemia she decided to found the charity LEAF, but i also told about the possible things that Tash and LEAF would be able to do for not just me but also my family. I thought this was brilliant as there are charities out there who help the person who is actually going through the problem but you never hear about a charity helping the family who are also going through everything and trying to be strong for said person. When Tash came to visit me in Poole hospital my fiance (now wife) Katie was with me, when Tash entered the room she straight away came across as very friendly, concerned and willing to help my family and I. Tash and LEAF were willing to do so much for us we were just so overwhelmed and we couldn't believe it. We exchanged phone numbers and we took LEAF's offer of having a cleaner come round to the house once a week and Tash informed us that she has volunteers at LEAF who (if i was happy with) would come and visit me in hospital and keep me company so it some more of the pressure taken away from Katie having to keep coming to see me. I was very happy to accept this offer and Tash said that it would be a person by the name of Angie who would come and see me. When Angie came and visited me in Poole hospital for the first time we hit it off straight away as we were both football fans, yes there was some teething problems with this as Angie supports Chelsea and I support Manchester United! But again I felt overwhelmed as i couldn't believe a person who i didn't know would give up their time to come and visit me in hospital and basic chat about anything. Myself and Angie kept in contact and both her and Tash would always be checking up on me and my family to see how I was getting or if there was anything else that LEAF could do for us. During one of my brief spells where I was aloud out of hospital as i was between treatments my family and I met up with Tash and her family at Monkey World, it was an amazing day out as it was a bit of normality and it was really good to meet up with Tash outside of the hospital. Even though now my treatment is over and I am in remission we have met up with Tash and her family again aswell as Angie and her family not only for a catch up, as when Katie and I got married in October Last year Tash, Angie and their partners attended. Then Katie and I were honoured in being invited to Tash and her now Husband Andrew's wedding in December last year. Tash and Angie are two absolutely amazing people they have done so much for my family and I, they have asked for nothing in return. Katie and I both feel that Tash, Angie and LEAF have not only helped us as a charity but we feel that they have become good friends to us and if there is anything that we could ever do for them all they need to do is ask. 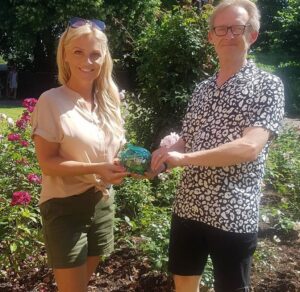 “But I can’t have blood cancer.  I’ve been out running three times this week!”

The doctor shook her head. “You’re very ill and we need to get you into hospital as soon as we can”.

It was 2009 and it’s times like these when you feel very alone, vulnerable, frightened, not sure what to ask apart from, “Am I going to die?” I didn’t know what to do.  I sat in my car outside the doctor’s surgery in a state of shock.

It had all started with a chance comment to a fellow runner. As we jogged along, I told her that I was waking up regularly soaked in sweat and joked that it was probably the male version of the menopause.  However, she didn’t laugh, in fact she took it very seriously and told me I should go to the doctor at once. I’m a relatively intelligent person but, at that time, I actually thought chemotherapy simply meant I would be given some chemicals, I would then go bald and die. Yes, really!

However, after 6 doses of chemo, every few weeks, being looked after by the most amazing people (fantastic NHS just could not have been better), I was told I was “In Remission” and, even though

I would never be “cured”, that was the end of the treatment and I could go back to work and start my life normally again.  So, back to the strains and stresses of teaching and strangely, I was a new man!  I was living my life in technicolour, smiling more, enjoying things more and feeling really positive.  I started collecting money for cancer charities through headstands in odd places, all over the world and I became known as the Headstand King.  I was really pleased to get to £10K by standing upside down!

And then I heard of LEAF CHARITY.  I looked at the website and realised this was something that would have been so helpful to me when I was diagnosed.  When you meet Natasha, you realise that she is an inspirational character, able to make everything sound more positive.  If I had known of this charity when I was diagnosed, I know that Natasha could have answered my questions, she would have understood my reactions and my worries, she could have given me advice and guidance.  I was lucky; I got through the treatment through the support of my family and I had sick-pay and some health insurance – but what about people who don’t have that? What about children who are diagnosed with blood cancer? I realised that this was an amazing, and vital, charity that did so much for cancer sufferers AND their families who needed advice, support and sometimes financial assistance. I knew this was where I should put my efforts and so “The Headstandking” (yes, I’m on Youtube!”) came out of retirement to perform more headstands for cash as well as a Wing Walk, parachute jump and forward-facing Abseil to raise money and awareness of Leaf Charity.

Now, in 2022, 13 years into remission, I am “fit as a dog” running 5 miles every 2 days.  When people ask me why I run so fast at the age of 64, I tell the above story and hope they are, one day, able to give a positive message to someone who has been diagnosed with blood cancer.  There IS a good chance of life after chemotherapy and there IS the most amazing charity that will help in those dark days.

But, as with all charities, Natasha and LEAF CHARITY need YOUR HELP in order to give best support to the people who really need it.